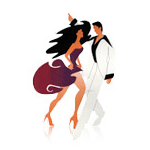 Learn all about the Hustle!

What is the Hustle?

The hustle peaked in popularity in the mid-to-late 1970s, particularly following the release of the film, Saturday Night Fever. It can be danced with a partner or in a line formation, and a number of stylistic variations exist, from the New York Hustle to the California Hustle (i.e. the “Bus Stop”).

History of the Hustle

Unlike many other ballroom dances, the origins of the Hustle aren’t buried in the distant past. Many hustle fans can still remember when the dance first swept the country in the mid-to-late 1970s, following the release of the blockbuster film, Saturday Night Fever.

As with so many other dance crazes, the hustle began in the party scene and dance clubs of New York City. Dancers in the local Latino community created the hustle after infusing the salsa with swing, mambo, and even tango. The popularity of hustle competitions attracted many of the city’s best dancers, helping introduce the hustle into the mainstream. From there, dancers throughout the country developed variations of the original steps, including line dance and partner versions, with several types demonstrated in Saturday Night Fever. Disco fever hit its peak in the middle years of the decade, and the hustle became the defining pop culture dance for the post-sixties generation.

Once the hype surrounding the film died down in the late 1970s and early 1980s, the hustle lost some of its luster as people began to rediscover other Latin dances. It has since regained some of its appeal, however, particularly with the popularity of the TV series, That ’70s Show, and the trend among many stylish hosts to hold ’70s-themed parties and events.

How to Dance the Hustle/Basic Steps

If you can walk, you can do the basic California Hustle. Line dancing fans will already be familiar with this popular step. It may look difficult, but only because it has so many steps. However, it’s pretty straightforward, so put on some of your favorite disco records and have a go!

The Hustle in the Movies

Learn to Dance the Hustle

Arthur Murray Lancaster, based in the greater Lancaster area, is part of the internationally renowned Arthur Murray Dance Studios system. The Lancaster franchise teaches hundreds of students each year to hustle, rumba, salsa, ballroom, swing dance, cha-cha, and others. To schedule your complimentary first dance lesson, fill out our on-site contact form here.

Come visit our dance studios in Lancaster, PA and start dancing today! Get your first lesson for free from Pennsylvania's leader in dance!

Get Your First Lesson for Free!

Discover the thrill of ballroom dancing for yourself! Become the dancer you always wanted to be...
Contact Us